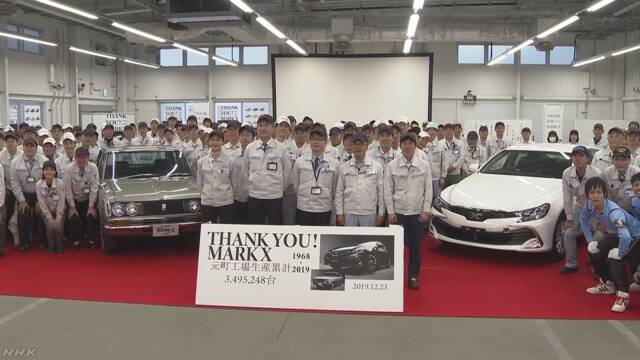 Mark X, a sedan –type passenger car that Toyota Motor has been selling for more than 50 years since its predecessor, Mark II, finished production on the 23rd, and a farewell event was held at a factory in Toyota City, Aichi Prefecture. The Mark II, launched in 1968, gained popularity as a luxury sedan with a stylish design, and sold 210,000 units a year in 1989 at the peak, a cumulative total of more than 6.51 million units.

Since 2004, it has continued to be sold as the successor Mark X, but due to the popularity of SUVs and minivans, sales last year decreased to about 3900 units, and Toyota decided to end production. On the 23rd, the final production was completed at Toyota’s Motomachi Plant, and a farewell event was held with approximately 200 people, including engineers involved in development, attending.

Yumi Ninoyu, the factory manager, told his story in which the car he bought for the first time was a Mark II, and said, “It was a car that made salaried workers feels the joy of holding a car. I want to”. While domestic sales of passenger car are sluggish, Toyota has decided to narrow down about 60 productions models to about 30 models by around 2025.